Under some circumstances workers that work from home or in different offices may want to stay continuously connected, with the same ease of access as you would have if you were working in a group around a table. Most VOIP systems used for telephony services can work, but setting up conferences can be annoying, and the always-on behavior and difficultly to “break out” from a group chat to chat privately can be annoying.

Why TeamSpeak and not Ventrilo/Skype/Mumble?

Ventrilo is a VoIP solution commonly used for video games. The business model for ventrilo revolves around licensing for resellers, with only the 8 seat server being available for download. Additionally it’s old and doesn’t have the nicer security features of Mumble and TeamSpeak 3.

Skype It doesn’t provide the instant access and ability to “jump in” to rooms at any times, also the total control of the environment helps improve security.

Mumble is an open source VoIP solution that has picked up a lot in the gaming community. Unlike Ventrilo it isn’t limited to the 8 seats or TeamSpeak which is limited to 512 for free servers. Mumble would be my second choice, however last time I used Mumble it wasn’t quite as polished in terms of ease to use and set up, otherwise it would be my first.

Everyone’s identity has a private key that they use to identify themselves with. This private key removes the need for user account management with passwords on every server they connect to. This also allows the user to export their private key to their other devices and have their identities follow them around regardless of the device.

We’re going to download TeamSpeak 3 and install it into /opt/teamspeak, get the latest download from the TeamSpeak 3 site.

The serveradmin username/password and token you’re given are very important, save them, we’ll be using them later.

Fire up your TeamSpeak client, click “Connections” and select “Connect”, you’ll be presented with the connection window. 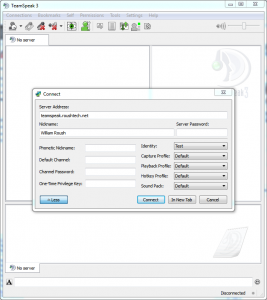 You’l want to take that token you had in the installation step and put it into the privilege window that pops up. If it doesn’t pop up select “Permissions” and “Use Privilege Key”. Entering this key will make you a server administrator for this virtual server instance.

Next we’ll dive into the configuration of the virtual server, right click on the name of the server and select “Edit Virtual Server”. 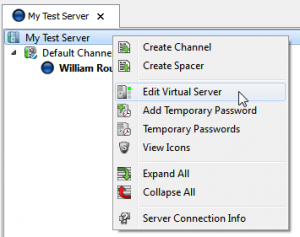 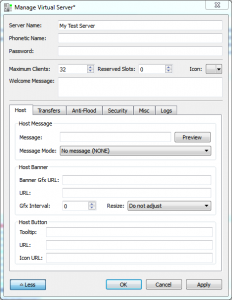 Here you’re given options to change the server name, put limits, passwords, change security settings, and configure various messages the user will get upon logging on to your server.

Right click on the server again and select “Create Channel” 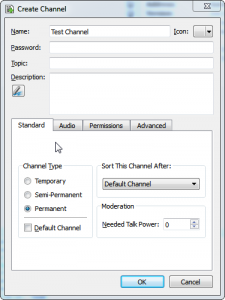 Here we can give a channel a name, topic, description and set it’s type (usually you’ll be setting this to “permanent”). The audio tab allows you to edit audio codec settings, you can configure the trade-off between sound quality and bandwidth requirements here. Changing codec settings can be useful for making a channel for which people on flaky cell phone connections can join in. 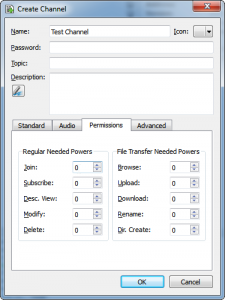 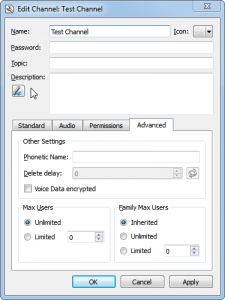 A review from a user on Republic Wireless, a relatively new wireless carrier that uses WiFi to offload your phone calls and text messages, reducing costs and passing those savings off to you.

Republic Wireless is a wireless services provider started by the VOIP provider BandWidth. They differ from your common wireless providers by understanding the concept that anything the cell network can do, the internet can do better. They save you money by offloading as much as they can, including phone calls onto your wifi connection. This reduces their costs and they pass that onto you.

You can jump between plans twice a month on their website at the click of a button, allowing you to jump on 4G when you’re going to some big city for a conference and will be pulling a lot of data, but fall back on 3G when you’re at home surrounded by WiFi you use often and your own computer and internet.

The biggest thing I worried about up-front was dead zones. Well it’s basically Sprint when you’re on the cell network, so nothing new for me there. Coverage was a bit spotty but I never was unable to make calls, data usually suffered poorly in these places though. All the same problems I had when I was a Sprint customer I have now when I’m on the cell network.

However at work, there is a funny dead spot that affects all of us… well, did affect all of us. Now two of us are on Republic and we tag on our guest wireless to make phone calls, so while we have Verizon and Sprint people having to move around the building to find cell signal, us Republic users are strong phone and texting over WiFi.

First call I make I’m on wireless, nice and clear (relatively), arguably better than when I’m on the cell network. Walked on the other side of the house where my WiFi is spotty without thinking about it, after my call Republic had a message for me “Congratulations on your first WiFi to cell transfer!”, I honestly didn’t even notice.

When I’m on cell, again I notice no difference from Sprint’s network. Of course this is all “by ear” and phone quality is garbage as-is (when compared to higher quality VOIP services such as TeamSpeak).

The account management UI on the site is simple and easy to use and offers a few fun reports on WiFi offloading. Everything is consistently clean and minimal, without the need for a ton of additional text, details, and ads for other services plastered all over the screen as is common with other carriers.

Their mobile app leaves a lot to be desired, I can’t access billing, orders or my overall WiFi offloading, but is receiving improvements so we may see those sometime. Recently detailed data usage has been added, showing you how much data is being used on various networks including wireless, cell and roaming, and by what apps. Very useful.

Dashboard, not much to see here.

Now for the bad news, Republic Wireless currently only offers 3 phones. The Moto X (just releasing the 2nd gen), the Moto G (1st gen) and the Moto E. The reason for this is that they have to put their own calling software on the phone to handle their WiFi offloading technology.

If you’re looking for a specific phone (or anything not Android) you’re out of luck for the time being. I think the range of phones offers a decent choice in features and prices, but I can see if you have your heart set on a phone you may be locked out of Republic Wireless.

I hope they consider porting their system to Cyanogenmod, opening up for unsupported phones that you can hack onto their network.

Unless you need a specific phone or can’t deal with Sprint’s towers, go with Republic Wireless, you’re throwing money away if you don’t. If you’re currently on Sprint you’re dealing with their spotty towers AND not taking advantage of leveraging WiFi, stop doing that to yourself and get on Republic Wireless.

Looking at my bill and my early cancellation fees (yours may be different), I should have dropped them months ago and hopped on Republic Wireless for a massive savings by now.